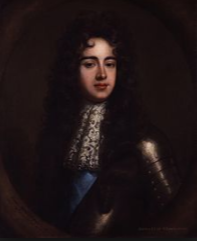 The Bitter Trade’s plot follows hard on the heels of the Monmouth Rebellion. I asked the 17th century historian Andrea Zuvich (aka The 17th Century Lady) to share some of her expertise on the Duke of Monmouth and his attempted coup in 1685.

Andrea Zuvich writes: If there’s one historical person you need to know about from the early 1680s, it’s the Duke of Monmouth. Why? Well, not only was he King Charles II’s favourite bastard son, but he was a great military leader and one of the most handsome of the Restoration rakes. Monmouth also led the ill-fated rebellion against his uncle, King James II in 1685 – an act which led to one of the most horrific executions in British history.

Often glossed over in history books as a silly pretty boy, Monmouth was in fact much more. At one point, he was Captain-General of the Army and the letters he wrote during his time in this position indicate he actually cared about the welfare of the men under his command. In the National Archives, there are documents – written and signed by Monmouth – which show his price calculations of bread, cheese, and other foodstuffs for his soldiers.

Brought up in the debauched atmosphere of his father’s court, it naturally followed that he, too, became a notorious libertine. This photo, which I took at the Museum of Somerset in Taunton, England, shows Monmouth in his prime. You see his full, sensuous, lips, his thick eyebrows, and those magnetic eyes. Whether or not you find him attractive in this portrait is neither here nor there because in person – in his time – he was considered extremely handsome. Women threw themselves at him. He was athletic, energetic, and a great dancer – so much so that both major 17th-century diarists Samuel Pepys and John Evelyn commented on these things.

At one point he had everything a man could want – money, titles, land, a wife and children, a mistress, and all the other accoutrements a man of his position could wish. But Jemmy (as he was affectionately nicknamed) had an ambitious streak mingled with a certain malleability not dissimilar from his grandfather, Charles I. He wanted to be king. And as the eldest son of King Charles II, why not? The problem lay in his illegitimacy. Charles, through his wife Catherine of Braganza, had been unable to have legitimate offspring and there were those who adamantly refused to accept Charles’s younger brother James, Duke of York, as the heir to the throne.

Following his supposed involvement in the Rye House Plot of 1683, Monmouth was exiled. With him, he took Lady Henrietta Wentworth – the woman who proved to be his greatest love – and they were welcomed at the court of William and Mary in the Dutch Republic (now The Netherlands). It was during this exile that Monmouth began to associate with other exiles, including the Scot Robert Ferguson. The latter, along with several other men, convinced Monmouth that he should be the king following his father’s death. This was not the first time this idea was considered, for earlier in the decade, the Exclusion Crisis nearly excluded the Catholic James from the line of succession.

Monmouth led the now infamous Monmouth’s Rebellion of 1685, which some refer to as the Pitchfork Rebellion, and was soundly defeated at the Battle of Sedgemoor in Somerset. Some of the rebels were summarily executed, many others were sent to the Bloody Assizes – trials presided over by the notorious ‘Hanging Judge’ George Jeffreys. Some were executed, some got away with fines, and many were transported into slavery in New World plantations.

The Duke of Monmouth was captured and hauled back to London where he was incarcerated in the Tower of London. On the 15th of July, 1685, the thirty-six-year-old man was taken up to Tower Hill. Many people had come to witness his execution, but instead of being dispatched swiftly by the executioner’s axe, it took five chops of the axe and severing with a knife before Monmouth’s head fell from his body. Monmouth’s executioner, you see, was none other than Jack Ketch – a man who was responsible for the botched execution of Lord Russell following the Rye House Plot a couple of years before. Monmouth’s cruel and bloody end stained much more than the wooden planks of the scaffold. King James II – already unpopular because he was a Catholic and giving high posts to Catholics – seems to have hurt his reputation even more by not showing Monmouth, his nephew, mercy.

A little more than three years passed before James was exiled and William and Mary were invited to take the throne. The Glorious Revolution of 1688/89 was a major turning point for British history. There can be no doubt that Monmouth’s horrible end passed through William’s mind as he crossed the Channel. Unlike Monmouth, William had a large army and great support for his invasion. A thousand questions go through the historian’s mind. Had Monmouth not invaded those three years before, would William have ever invaded? Would he have had as much support? If Monmouth had lived, gone to Germany and lived the rest of his days with Lady Wentworth – what, if any, impact would he have had on this nation’s history? But things did not end differently, and he remains one of the most tragic figures of the Stuart family.

Andrea is a hugely knowledgeable and generous historian / novelist who blogs regularly on the Stuart era. She’s the author of The Stuarts in 100 Facts. Catch up with her blogs at www.andreazuvich.com or follow her @17thCenturyLady